A downloadable game for Windows and macOS

Valeria Jimenez is a college sophomore on the verge of losing her scholarship. She’s broke, failing her classes, has few friends, and she’s desperate for anything that can help her. Enter the Entity: a demon-like creature that strikes a deal with Valeria that will solve all her problems. She just has to do one thing: sabotage her long time best friend Darren Romero.

Oh, and if she doesn't? The Entity gets her soul.

♥ Play as Valeria in this visual novel! Will it be friendship over all, or is it every person for themselves?

♥ Two available endings based on your Friendship and Morality!

The synopsis alone had me actually gasping, my dudes. What a plot right out the gate!

The title screen's artstyle (with visible paintstrokes) is strangely compelling. She's so stressed, and I keep looking into her eyes.

There's a nice vector effect on the in-game BG, too. How did you do it? I'd genuinely like to know if you used photoshop or any specific site, because the quality is so crisp and pleasant to look at. :) You've also coded in a very nice screen() for receiving text messages. It's such a smooth transition!

HAHA and then I blocked the demon's number and got an abrupt ending. Okay, time to reload.

The demon, when they appeared, was not what I expected. They have a lot more clothes on than I imagined lol. :P I like them -- though of all the characters, Darren is by far my favorite. He tries hard, cares a lot for us in his own way, and sometimes gets mocked by other students due to their own insecurities. I knew right away in my heart, investing my time into his friendship would pay off. I couldn't help defending him every time I get the chance, and I genuinely did value my friendship to him. Even when he flaked on us, I 100% trusted that he'd come around and explain himself. And he did!

So that being said... I'm not terribly interested in pursuing the ending where we betray this good boy. The demon can have Valoria's soul if they want, but they can't have Darren lol.

Overall The Death Contract was enjoyable, and my main criticism is that it's very quiet. There were no music or sound effects as far as I can tell, and I would highly recommend that addition in future versions. :)

hello!! i’m the artist and director, and thank you so much for the comment! the backgrounds were done in photoshop using high resolution photos, then by applying the cutout filter (and messing with the values a bit). the text messaging system was not made by the team but is credited in the description :)

we’re definitely planning to add more content, especially as the artist i’d like to add some more sprites and painted scenes as visual novels typically have, but also music and sound effects as you say.

it’s interesting that you view darren that way, while others have told me they dislike him. but everyone’s different i suppose? :D 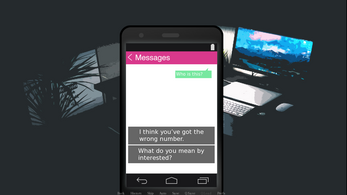 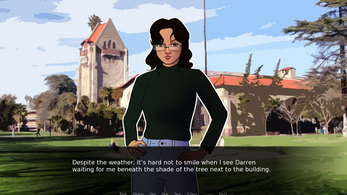